Why yes! The Russian Hacking Thing is a BFD! 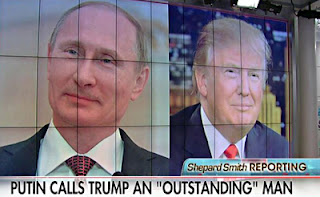 So, I guess one of the Strangely Blogged style-sheet things is that I try to be consistent--and I've always been on board with of course Russia was behind the hacks of the DNC because OMG! There were MSM reports of spy agency consensus that Russia was behind this thing in July. And there were adequate questions regarding Trump's campaign connections with Russia--yep, in July. We knew this stuff early on, so hearing that there is "high confidence" now regarding Russia being behind the breach only can mean so much.

So what if independent digital security outfits recognized what was going on even earlier? It really isn't for me to analyze the forensic computer stuff because I'm simply not personally equipped and the raw stuff isn't out there, but I think we know why Putin might have been Team Trump. And I think a planned foreign campaign against one of our political candidates should maybe matter. What came out wasn't dezinformatsiya exactly--but it was framed as leaks that could be applied in this way, which RW bloggers and fake news peddlers obligingly did (not that there isn't so much overlap between these groups).

It's disingenuous for the Trump transition team to pretend that there is no validity at all to the claims that Russia tried to meddle in our election process. The claims of ties between the Trump campaign and Russia isn't new, but the connections seem to be growing, not shrinking. It's likely, for example, that Secretary of State pick Rex Tillerson has a pretty strong investment in sanctions against Russia being lifted.

I do understand the reason for the denial that the hack was even Russian--even if I dismissed (which I don't as yet) the possibility that there was Trump campaign/Russian collusion. After all, Donald Trump as president needs to be viewed as legitimate and decidedly so, because he can't possibly be unaware that America is deeply divided. But there is an asterisk here, because he doesn't have as commanding an electoral college vote as he wants to project, and despite what some of his supporters might believe, he did lose the popular vote very badly.  He can pretend that his failure to win the popular vote is due to "illegal votes", but it isn't so. He lost with the majority of voters. He might have won, for example, if you just look at "counties" or "districts"--but that would only make him the steep favorite if cows could vote. And given that only one candidate ever put their name on a line of steaks, the outcome in cow country would be dubious with the bovine electorate factored in.

Now, this whole thing doesn't mean a lot regarding tomorrow's vote of the electors. Just as with the Jill Stein-headed recount efforts, I think some liberals are hoping there can be a do-over of something that went very wrong.  It may be possible that at some later date, impeachment could be a possibility of some of the more dire speculations regarding the relationship between Trump and the hack come out.  But that is a very dumb thing to hope for when the Congress is currently held by Republicans. I don't like VP Mike Pence and his theocratic nonsense being in charge, any more than I like the idea of Rep. Paul "Granny-Starver" Ryan in the WH.

Liberals, there are no do-overs. You fucking lose track of the ball, and we get Trumped. We either sort out how to consistently win down-ticket--get control of state governments that run elections, and kick the can upwards, or just accept that Russia made us a bear's bitch.
Posted by Vixen Strangely at 12:06 AM