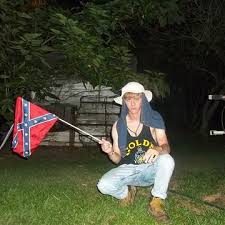 Dylann Roof was charged with 33 counts in his federal indictment and found guilty for every one because he admitted as much. This killer could be called "self-radicalized", but clearly, there was material out there that helped his feeble mind exercise itself to the rage necessary to murder in the coldest kind of blood nine decent people. He read his crime into existence based on hate websites and slanted white supremacist narratives. He does not represent a rare, unheard-of, brand of disgusting hate--he is just an example of that hate being executed in a way that we take notice of.

To my mind, people who don't actually carry firearms into black churches with the intent of blowing away people they see as "part of the problem", but make that kind of act seem like "the solution" by highlighting instances of black crime (as if there was no white-identified folks out there doing things)  and denying the reality of racial discrimination as it currently exists, on the basis of  "but so much worse used to happen"--have a share of blame. Maybe not the kind where one is legally penalized.

But I remain pretty pissed about the "Dapper Racists" getting fuzzily profiled of late. They need to be socially penalized by people recognizing what they actually mean, and what they actually inspire. They aren't the grubby WWC folks who get their hands dirty, laws no! But they whisper that race war shit in so many ears and maybe they pretend to be appalled--but you know they don't mind. If they want to pretend that doesn't get taken literally, they can go ahead but not one even alleged progressive, liberal, or Democratic shit-soul should get away with pretending they don't mean their shit literally. (Please let's not ever, on the Democratic side, play this bullshit by pretending that "identity politics" means anything but "civil rights are for all folks", or "political correctness" means anything other than, "respecting the people who actually happen to exist in this world". People who think identity politics is the problem don't understand the shit some people are made to eat for being who they are, and people who use the term "political correctness" usually just want to go out of their way to be incorrect--irrespective of politics, but for the sheer dumbass transgressive joy of making somebody feel less-than.)

And yes, I called Democrats (real or imagined) or progressives or liberals or how ever they want to self-identify "shit-souls" if they don't call out racism and the spreaders of its myths and legends. If you compromise on whether a civil society respects the rights of all people, that is a problem. If you champion people who want a society that treats some people better because of course (racism)--that is a problem.

I think I want the Roof boy saved alive as an example. We need to understand where bad ideas come from, how they get adopted and retained, how they lead to terrible things. He is an example. He certainly is.  A bad one--but we can learn from his stupidity.

There are some things too serious to joke about--and real people's lives are pretty much topping that list. There is no ironic "Sieg Heil", no hilarious references to gas chambers, no amusing lynching allusions. You either deploy those references to break the race lie and shame the ignorant sociopaths who clutch their white identity politics and grievances to their bosoms or you fail to understand what grief these ideas have meant to marginalized people.

Posted by Vixen Strangely at 11:55 PM