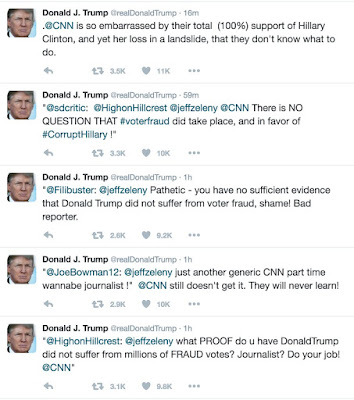 The above graphic represents a Twitter exchange that happened basically right now where Trump is berating a CNN reporter and also retweeting a 16-year old, while depicting Hillary Clinton as having lost in a landslide (which isn't what the popular vote says), alleging voter fraud (with no proof) and maintaining that CNN as a network was 100% supportive of Clinton despite having Jeffrey Lord and Corey Lewandowski on regularly who were totally supportive of Donald Trump.

That's a whole lot of really not-vetted spontaneous and ill-advised communication. People accustomed to working in government, or even who just really care about the public relations aspect of their own brand, don't perform publically in this way. Privately, individuals have freedom of speech--but the choice in how to use one's freedom to speak becomes complicated with the level of responsibility one carries.

You know--for example if one represented the leadership of an entire country, the indispensable nation for the free world. Or something like that.

Now, Trump has not yet been inaugurated, but having somehow won despite that massive voter fraud he believes was perpetrated against him, maybe he should think about getting his social media shit together a little bit? And if he wants to post on his Twitter timeline that there's no valid proof that "Trump" wasn't facing "millions of FRAUD votes" against him, maybe he could put up or shut up by petitioning for a recount himself in VA, NH, and wherever the hell else he thinks he got diddled.

Otherwise, he just seems like he came in second in a dick-measuring contest to a girl and has lost his mind over it. Not a good look. Sad!

(And if there is absolutely no one on his campaign/transition staff who has let him know how bad the optics are--really? Malpractice! He's an outsider and has his own rules and doesn't know--but someone has to let him know, right?)
Posted by Vixen Strangely at 11:14 PM