This Argument is Not Very Good 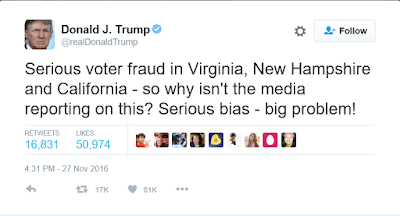 In response to the recount effort initiated by Green Party presidential nominee Jill Stein, President-elect Donald Trump has been on something of a...roll. On one hand, he thinks the recount effort is a waste of money and time and feels pretty certain that he won, but then again, on the other side, he seems to think this thing where he lost the popular vote is definitely a sign of voter fraud. It's kind of alarming that he seems to be uncritically accepting of unfounded conspiracy theory about voter fraud from his very good friends at InfoWars.

But it's also kind of a dumb argument is two respects: for one thing, if you're trying to say that a recount is a perfectly stupid waste of time, maybe it isn't so smart to suggest that the actual vote tabulation is basically false--which really suggests further investigation should be required? But for another, wouldn't it be really awkward if there was a vote-rigging conspiracy so incredibly clever that it escaped detection despite mobilizing millions of illegal voters--but distributed those voters in states like California which was already Hillary country and failed to cover the spread in key swing states? What kind of moron Machiavellis does he take the Left for?

Leaving the issue of whether there's any factual basis for his Tweets aside, is this actually presidential? Conspiracy theory, poor sportsmanship, casting doubt on the electoral system that, by the way, declared him a winner? I just don't get what he's about, unless this isn't even strategic and is just some kind of lashing out. (Why no, I don't really think he does sleight of hand "Twitter War!!!" distractions to divert media coverage away from bad news like his many, many business conflicts of interest. It just looks that way because he sleeps like, two hours a night and hits social media up like a an attention junkie. That and there just actually is always other bad news that needs to be distracted from. )

But really, as I said before, if he truly, really, legitimately won, a recount in one state or any number of them doesn't stop him from putting together a cabinet and keeping on with the transition and getting intelligence briefings and all those good things.

It is really up to him what he does with his shot.
Posted by Vixen Strangely at 12:20 AM