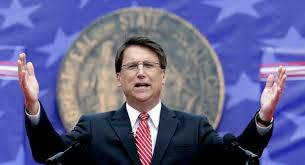 I don't know if I'd go as far as saying that, faced with a loss, Gov. Pat McCrory of NC is thinking of just stealing the election. After all, if there's a low-enough margin, a recount is a fine thing (although I don't know if it would make a difference) and it seems like it wouldn't be an easy matter for the NC legislature to simply "give" the election to him. But it is interesting that he's calling his potential loss fraud. After all, during his term, North Carolina took many steps to combat "voter fraud" through a process that lead to voter suppression.

And yet he appears to be losing anyway. I think the takeaway might be that 1) Voter suppression doesn't really have anything to do with voter fraud, real or imagined and 2) Voter fraud is not the thing where people who don't vote for you get to vote.

But that's just what I think.

Posted by Vixen Strangely at 7:14 AM