Giuliani is the Worst Surrogate Ever. 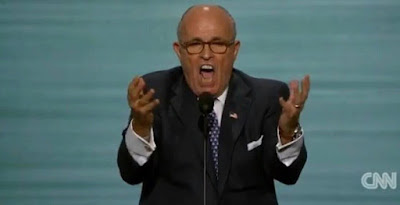 I think former NYC mayor Rudolph Giuliani has reached a very interesting place in his political career. Post-mayorality, he's had some success on the "giving speeches and writing books" deal, with many comfortable positions to lay his arse and discuss things like "What was it like to cope with 9/11"and "What do you think about police brutality?" on television. People have been astonishingly kind to Rudy Giuliani.  This is the guy who defended the NYPD over the Patrick Dorismond slaying, the violation of Abner Louima, and the shooting of Amadou Diallo. This is basically the embodiment of what Black Lives Matter is about--his kind of clueless worship of authority over the rights of the accused.  As for his being "America's Mayor" when 9/11 happened, the funny thing about that is that it turns out that everything about his "leadership" was super wrong. For one thing, he repeatedly forgets that this enormity occurred during the presidency of a Republican. He also never really answered for how he chose one of the Towers to house the emergency command center, knowing that the World Towers were a previous terror target, and he failed to address faulty radios during his mayorship--resulting in the deaths of many first responders.

His competence was not all it was cracked up to be. We get this now--but Giuliani has never received the memo and thinks things he says are still things people can take to heart. Like whether maybe he is the right person to discuss whether former president Bill Clinton's infidelity should reflect on his spouse. (As for Giuliani, he'll have you know he is washed in the blood of the Lamb, sir! So be shushing yourself about his personal improprieties which are like eye-popping.) He also thinks everyone is violating that adultery commandment, any way. Well, maybe in his circle.

He also thinks it's okay to just outright say Trump is better than a woman. Like that. Wow. Not really how I'd put it knowing my candidate was behind with women as a demographic, but whatever. Also he said all kinds of things that didn't pass fact-checking.  He didn't do anything to remedy any of what Trump put out there--he actually just reminded us that Rudy Giuliani is a total asshole who should not be treated like an honest contributor to our public discourse because--everything about his contributions suck and are disingenuous.

I hope the sinkhole that is the Trump campaign basically pulls this dude under.
Posted by Vixen Strangely at 11:53 PM