These Candies Leave a Bad Taste

So, Donald Trump, Jr. posted the above message on Twitter, and I don't think he'll delete it because it was exactly the message the Trump Campaign was putting out today regarding the acts of alleged terrorist Ahmed Rahami--who was not Syrian, nor a refugee, and who was found asleep in a doorway by police. (My priceless Tweet: "I woke up in a Linden doorway, the policeman knew my name," has been absurdly ignored, and I am miffed.) What can one even say? The alt-right version, no less simplistic, usually uses M&M's. So it's not original, in just the way it isn't insightful or clever. But it does have the Trump/Pence logo going for it. Which inspires me, because of course it does. 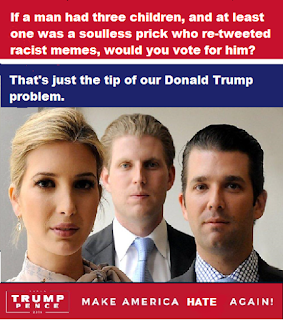 UPDATE: People trying to flee are dying before our actual eyes. And this privileged peckerwood wants to compare them to poisoned candy? Fuck him, his Daddy, their party and the alt-right.

UPDATE 9/28: He seems to have deleted the picture so here: 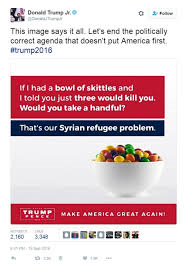 The internet doesn't actually forget, even if it loses some graphic integrity.
Posted by Vixen Strangely at 9:45 PM

By saying these things straight out when everyone else was still only dog-whistling, Trump easily won his party's nomination. He can't stop doing it now, and that is what has (and will continue to) prevented him from building a general election voter coalition that has a chance of winning. By doing what it took to win his party's base, he made certain he could never win the presidency.

To my way of thinking, that is very much a feature, not a bug...