Rudy Giuliani Has Advice About Women 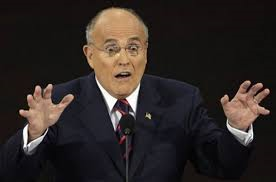 Former NYC Mayor Rudy Giuliani is sort of an interesting surrogate for Trump because I don't actually think he does anything for Donald Trump's likeability--and especially not with any of the demographics Trump's struggling with. But he is a guy who is at home on a television news set because for some reason, his opinion regarding things like policing and national security seems to be sought out. Which gives us the opportunity to hear opinions like this:

Donald Trump should skip the next two debates unless he gets special guarantees from the moderators, former New York mayor and top Trump adviser Rudy Giuliani told reporters after the debate.

Lester Holt, the NBC News anchor who moderated the debate, should be “ashamed of himself,” Giuliani said after the debate. He said Holt was wrong to attempt to fact-check Trump on the constitutionality of stop-and-frisk and his claimed opposition to the Iraq War.

Facts are apparently Trump's kryptonite. And who brings kryptonite to a fight?--Lex Luthor, that's who. So Lester Holt is equally as bad as Lex Luthor.  Those are just the results of brain-logics. He's distributing them to you because you can't just know facts and derive conclusions from them like some sort of rational actor! You need authoritarian interlocutors to tell you what the facts even mean, right?


So of course that's offensive bullshit because "How dare people be exposed to the basic ideas that politicians lie and journalists are supposed to uncover the truth?" is both dismissive of the voters' right to transparency and dismissive of the freedom of the press. That kind of sucks. But by all means, encourage the notion that Trump would be doing so much better if he didn't have to face the opponent who so terrifically out-classes him that he can't even. How does he face foreign terror--nah! Too hard! He'll duck stuff that bores him. Like 'Nam, his first two marriages and facts!

"The president of the United States, her husband, disgraced this country, what he did in the Oval Office. And she didn’t just stand by him. She attacked Monica Lewinsky," Giuliani continued. "And after being married to for 20 years, if you didn’t know the moment Monica Lewinsky said that Bill Clinton violated her that she was telling the truth, then you’re too stupid to be president."

Here's news for Giuliani: Women should not have to make a full-time job of being goal-tenders over our spouses' peckers. Saying she's too stupid to be president is saying her rightful place in this world was to literally be spending her time penis-minding. And if her spouse's penis went astray--that was her personal responsibility. I don't know if Giuliani's present spouse is making his dick her 24/7. Maybe there's a cell phone app for it these days. I never looked into it. I got a man, but I kind of trust him to watch where he puts his own dick, actually. What Bill Clinton did was stupid and passes for sexual harassment in many HR handbooks, but what happened between himself and Monica Lewinsky, the age difference aside (and she was certainly grown if not mature) was consensual.

Yes, sticking by him was a difficult choice--but it was hers. It's kind of hard to put a man's shit out on the lawn when it is the White House lawn. She did what she had to do and she did it for love, mutual respect, and because of any of a number of reasons that isn't anyone else's business but hers.  And I think serial adulterer Giuliani and serial adulterer Trump are massively disrespectful to their own former and current spouses and comari when they place the blame and responsibility to keep vigil over all the shit their wandering peckers do on the women.

I have been cheated on. I know who was responsible. You don't tell me the blame gets shifted to the one cheated on because it's an election year or because it's convenient or because she's the most grown person in the situation. You don't . That might be the grossest justification for anything ever.

But coming from Giuliani's experience? Well yeah, that somehow makes it more gross.

Posted by Vixen Strangely at 12:40 AM