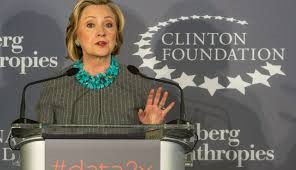 There are lots of ways to follow up on a story--you can just wholeheartedly print what your sources turn over to you, which can be a bit one-sided depending upon your sources. You can sift through all the data until you have a steaming mess of nearly unintelligible, but fair and balanced "both sides" journalism. Or you could actually follow up on a story, data point by data point, until a bigger picture emerges, thereby doing the journalism thing in a somewhat more pure form. In other words, it's not enough to describe what something "looks like" or "could be construed to be"--the trick is to arrive at what actually "is".

For which, it helps to understand what "is" means. Is a donation to a charity that does not pay a salary to Madame Clinton the same thing as donating either to her or her campaign? Nope. Do the aims of the Clinton Foundation and the goals of certain arms of the State Department have overlap? Insofar as making a positive difference in the lives of people--yes. It might help to understand what the Clinton Foundation does.  The organization is transparent about their donors.  It does valuable, even life-saving work, with a very high proportion of donations going directly to fund the work. It is not remotely a slush fund, nor is there really any evidence whatsoever that merely donating to the Foundation ever influenced Clinton's conduct in the duties of her office.

Which is why the claims of a AP article regarding donors to the Foundation reaching out for meetings with Clinton is a kind of weak link to make a "pay to play" assertion". It would be reasonable to ask--out of how many people she met with overall, how many were donors? But it also makes sense to question, weren't some of them people she would have met with in the regular course of State business anyway, and whether they actually received anything in return from her--that she alone could have approved? Not following up on whether the appearance of impropriety actually equaled impropriety is very meaningful.  See, leaving people with the impression that there is something "there" when no "there" has been found is irresponsible. Sometimes, there is an ethical duty to say "We did not find an actual 'there' there."

The reason why this matters should be apparent--but let's say it isn't--we have an election before us  where one side delightedly trucks in conspiracy theories. There is a lot to be said for the aphorism that rumors spread while the truth is still putting on its shoes. Leaving open a narrative based in a biased view against an organization based on how "some people would view" the appearance of the data without disclosure that the naked facts nullify that narrative is irresponsible.

When we have crowds chanting "lock her up" regarding a political figure, wouldn't it make sense not to try her by leaving the court of public opinion open to unproven nonsense, when it could easily be disproved? Or is there truly a set of "Clinton Rules"--where any appearance of a critical issue is simply bad for Clinton, whether it is valid or not.

And what I think is astounding, is the idea even by people reporting the story regarding the Foundation responsibly, that the Clinton family can not maintain the charity with some few changes. Why drop something for the sheer sake of appearance? If there is nothing actually, factually wrong with the organization, and the work is good and lives depend on it--why would someone shaft it for better press--when better press ought to be the outcome of a fully-vetted story?

I dunno but some people go out of their way to keep Clinton scandals alive, and it's ghoulish. Think of the children, would you? Namely, the ones who benefit from what charities like the Clinton Foundation does.  And consider whether we really want to make fundraising for good causes a liability for people with the pull to get good shit done. This whole thing strikes me as simply uncivil.

Posted by Vixen Strangely at 12:06 AM