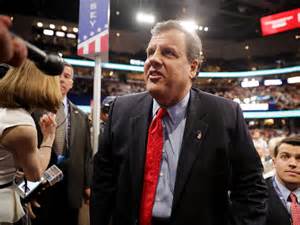 Even though this was supposed to be "Jobs night", NJ Governor Chris Christie took the time in his speech to try Hillary Clinton for the horrible things he thinks she ever did, like being a Democrat and running for president.

She also negotiated with Russia (which we call diplomacy) and which any anti-proliferation foreign policy person would think was right to do. Reagan even did. He says Clinton never fights for "us". Does Christie feel, for some reason, particularly unfought for? And does he happen to have a mouse in his pocket?

Seriously, this is they guy so enamored of the Trump deal he tried to math away Melania's plagiarism, saying it was only 7% of her speech. Well, if a sandwich was 93% cheesesteak and 7% mothballs, would you even eat it? (Or spend an unbelievable amount of time picking out mothballs.)

Former McCain Advisor Steve Schmidt called this Banana Republican. I call this a "bridge too far".
Posted by Vixen Strangely at 12:30 AM