Take Your Thoughts and Prayers and Shove Them 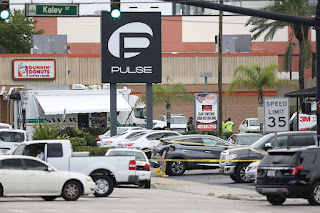 So, if you are a shitlord former presidential candidate who wants to take a minute a handful of months after appearing on a stage with anti-gay preachers who want a federal law to kill gay people to pretend that your stance against terrorism does shit for these victims, right here? Just take your thoughts and prayers and shove them. Your thoughts aren't worth anything and your prayers are against the very people who have been harmed. Do something positive. Learn about gay people and Islam. Or just get the fuck out of public life.

Or, if you are a dramatically reality-detached personality cultist, maybe congratulating yourself on being proved right that terrorism is a thing (when, no duh) is so extraordinarily grotesque that instead of merely "deleting your account", you should probably delete your entire run for the presidency. Maybe saying the words "Islamic extremism" and calling once again for a ban on Muslims in the US is ludicrous when you consider that Christians can be murderous against this particular population as well; and also that this Mateen wanker was born here and therefore couldn't have been barred entry to a country he was born in, and that US persons have been born here and convert to Islam and have no terroristic intent at all--like the late Muhammed Ali. Trump congratulates himself for a position wholly incoherent and untenable. And still and all--sometimes the wankers aren't even Islamists.

I am heartsick about these many victims of this horrendous tragedy, and I know the content of my thoughts, and, being without faith, I know the uselessness of my prayers. I will work and vote to do what I can to make sure that suspected terrorists and domestic batterers are not able to easily obtain automatic weapons, and I will always, always, be a voice against homophobia and Islamophobia. And I will be mindful that in life there are intersections of identity--Muslim LGBT people, for example. How do we ban them from coming here to be free (remember the US standing for freedom?) when they might face vicious threats to their existence often in their countries of origin?  How do we deny their existence when their home of origin is even here?

In the words of one the greats--"when the power of love overcomes the power of hate, we shall know peace." (On which great said it first, the jury is out--but I think it's right all the same.)

I don't think we need more thoughts or prayers--we need better gun policies and we need voices who speak out about tolerance and acceptance and not killing scores of people because you saw an act of affection between two men.  We need real action, not deliberate inaction, and local empowerment, not impotent talk.

Maybe some prayers and thoughts are decently offered, but they are not the answer to the great need for action we have.

Posted by Vixen Strangely at 11:48 PM

amen. thoughts and prayers to skydaddy are useless