Guess Who Was Hanging With the Homophobes Today? 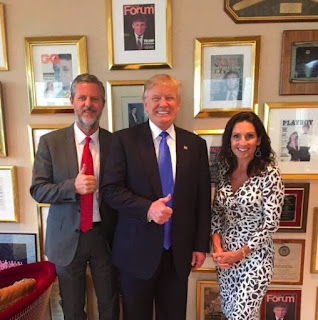 If you said it was Donald Trump that hung out with the homophobes today, give yourself a golf clap and wipe the smile off your face because nobody didn't know that, okay?  Today, after a seven hour or something like that meeting with evangelicals, at which, amongst other odd things he did was question Hillary Clinton's faith (about which, maybe I got some stuff later?); he then decided that Jerry Falwell Jr and Michele Bachmann were totally the best people he had to be his emissaries to the land of the Evangel.

You might think it's weird as hell that this time last week he was trying to 'splain to LGBTQA folk that he was better than Clinton for them. You are exactly right. This would be weird as hell--if  you adopted the premise that Trump actually gave an overt shit about queer people before at any time that was not cancelled out by anti-queer shenanigans.

Now, I don't think he's a theocrat by nature--nope. He's just your old-fashioned "folks who are different suck" kind of hater. But he is standing at the ready to support theocrat business, select theocrat-friendly judges, and doesn't stick with queer people longer than it takes for us to grieve our dead.

I have no use in the world for this man. Not compost. Not a coastal habitat for aquatic life (to class up the destination of Luca Brasi.) That picture above? Is the smile of a man who just kissed the ass of millions of homophobes he never met, but Lord he'll respect their offerings.

Yes he will. And I am faithless and disgusted. What does it profit a man? Probably not enough to even repay his loans to his own campaign--but it is what a GOP candidate must, tooth-gritttingly, do, no?

Screw him and the party he rode in on.