Candidate Clinton Not Bothered By the Words 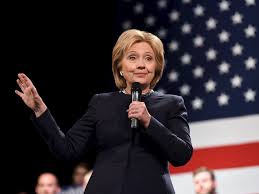 I think there's something stupid in the regular RW argument that it somehow shows leadership to say the words "radical Islam" as if they were magic words, and that by simply saying them out loud, all kinds of positive benefits should therefrom accrue. The criticism that President Obama's lack of saying this magic phrase matters is part of Trump's relatively pathological insinuation that Obama somehow wants bad terrorist things to happen. Which is objectively nonsense.

Today, Hillary Clinton took the bad words away from the mad baby (Does Donald Trump not remind you of a terrible two-year old on some level--if not, why not? Have you never spent time around toddlers? Why do you hate babies?) Donald Trump by saying them:

"From my perspective, it matters what we do more than what we say," Clinton said on CNN's "New Day." "And it mattered we got bin Laden, not what name we called him. I have clearly said we -- whether you call it radical jihadism or radical Islamism, I'm happy to say either. I think they mean the same thing."

She's happy to say either, but it has no importance, because--it doesn't. Saying the magic words "radical Islamism" isn't a plan. Trump doesn't have a plan. Clinton does. By saying the words, she took the power away from them by shrugging it off. Say them, don't say them, she just said them, but she by all the rest of what she says shows she isn't interested in any attempt to "demonize and demagogue and declare war on an entire religion".

Pulling the stinger out of the hornet is a good political skill, I think. She is not at war with Islam, but at odds with terror and bigotry, and she is still miles and miles ahead of Trump in terms of class.

Also--Trump denied press access to the Washington Post because they reported on his being bullshit. This should (not) go well for him, if I have any grasp of what the very point of a free press has always been.

Also, why is Trump so bothered by a free press? Because Washington Post is just the latest and most notable of many journo exclusions. He really has something against the First Amendment, you think?

His other credential denials:

It’s unusual for a candidate to ban a reporter, but Trump has done so repeatedly since he announced he was seeking the Republican nomination last June. Among the news organizations whose reporters have been blacklisted: Gawker, BuzzFeed, Foreign Policy, Politico, Fusion, Univision, Mother Jones, the New Hampshire Union Leader, the Des Moines Register, the Daily Beast and Huffington Post.

You know what? I hope they take this lack of access as a mark of pride and plow through his past dirt like he owed them money. And then he might know what it's like to be bothered by words.
Posted by Vixen Strangely at 11:54 PM