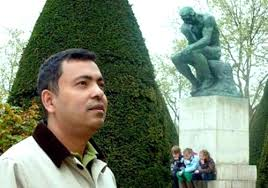 Being an atheist is not reason for being hacked to death--I hope.

Being a blogger is not reason to be hacked to death, I hope.

Being an American atheist and blogger a couple days younger than Roy, I realize I haven't challenged religion in the in-your-face way he did, but I feel no less like the kind of religious movement that would kill him, would kill me. And am, not surprisingly, very much against that kind of extremist--the same kind that made a fatwa against Salman Rushdie, that follows Lars Vilks to this day, and that slew several contributors to Charlie Hebdo magazine.

Posted by Vixen Strangely at 2:15 AM

I'll just keep shouting it into the darkness: ALL RELIGIOUS MYTHOLOGY IS DANGEROUS, because once you can get people to deeply believe in unambiguously ridiculous and impossible things, then they are primed to be convinced to take any action the clerics wish to instruct them to.

And religious mythology is particularly dangerous because it invariably reduced the percieved consequences of life-and-death actions. Killing is not an extreme act, but one of faith, joy and rewards, while dying isn't a deterrent to violence, because dying means actually improving your quality of life.

These are always toxic concepts, used to manipulate people to act in the interest of the tribal leadership only, and when you see a doctrine that essentially weaponizes its adherents you should be very, very afraid...