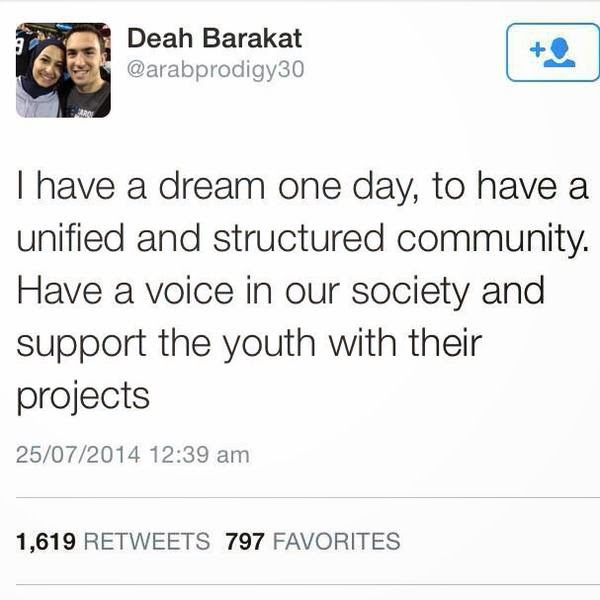 Deah Shaddy Barakat, his wife, Yusor Muhammed, and her sister, Razan Muhammad Abu-Salha, were gunned down in Chapel Hill, NC by a self-professed "anti-theist" and gun enthusiast who maintains that he killed the trio over a parking space dispute.

As of yet, I haven't heard enough of Craig Stephen Hicks' side to be 100% certain that he didn't just snap out and kill three human beings over a petty neighborhood squabble that could have easily been resolved in a handful of other, adult, peaceful ways. From the sound of things, he was a guy carrying a shit-ton of anger who made other neighbors a bit wary--and that isn't a good sign. Some people are like powder kegs. When they go off is a just a timing issue with their particular fuse.


But this is a terrible tragedy, because these were such promising and even already accomplished young people. They were the kind of young people with goals and ideals about what they wanted to be--how the hell is some cheap-ass story about a "parking dispute" satisfactory when in a reasonable world, those young people would still be building their futures? It's infuriating that lives are lost this easily over one man's rage.

And I do find it hard to think a parking dispute alone was the trigger. Not with all the anti-theism combined with the DIY attitude of the arms-bearing--a gun is a very particular tool, not a Swiss Army knife for life's inconveniences. I have a hard time taking seriously the comments of Hicks' wife, who insisted this couldn't have to do with any bigotry on her husband's part. I sort of wonder if, like a person who sleeps next to a snorer that becomes immune to the racket, she just stopped noticing the ticking of the time bomb living with her.

The story is yet young. But I will point out that this is why in many ways, while I retract from supporting organized religion in any way, I have an issue with actual "anti-theism". It's one thing to believe religion is mostly made-up "just-so" stories that glaze over the real truth of the world we live in. It's another to become actually "anti-theist" and develop hate for the actual people who still have religion in their lives. Life is precious and too short to go around carrying a bunch of hate.
Posted by Vixen Strangely at 10:57 PM

I dunno. With the availability of cheap, deadly handguns, the narrative doesn't matter to me a great deal. You have people who might otherwise have thrown a punch, or slashed a tire opening fire in a moment of stupid anger and three people are dead, twenty five lives are ruined.

It's a fools game to try to parse the story told by the killer after his (and it's almost always a 'him') arrest. A lawyer is trying to spin it to keep him from the death penalty, so grains of salt are required.

America is indulging itself in a gigantic social experiment where we're just arming the shit out of everybody and seeing what happens to society. And sure enough, society breaks down and people die hard.

We mock the 'good guy with a gun' story told by the NRA activists, but honestly, do you want to live in this deadly petri dish without your own firepower?

Hi Vixen, you make a good point about atheists. I appreciate the connotations in the way you divide the word.

Frankly, some of the most vehement fundamentalists I have run into are fundamentalist atheists. I've seen exhibitions of such a truncated view of reality, permeated with such a diminished capacity for possibilities, by some atheists that it is remarkable.

I have been intrigued by the naive idea of the conception that the only way of considering a divine possibility is from the point of view of religion.

Apparently people have no idea of the brilliant thinkers in philosophy that have spent centuries in the most sophisticated inquiry. And most atheists I've run into do not even realize that there are different ways of being an atheist. (For example, Ayn Rand and Jean-Paul Sartre were both atheists and shared virtually no thought in common about anything.)

I remember seeing a debate on TV between Christopher Hitchens and Dinesh D'Souza and thinking my god, these people are arguing about ideas that were already getting a little out of date in the times of Jules Verne. Just as an example, they were speaking from positions that existed before Edmund Husserl started phenomenology.

I've also noticed that today people arise and act as if there were an argument between science and religion. It's a bit like the president's crusades remark; there was a debate at the time of Copernicus, but those arguments lost credibility a long time ago.

However, when Wordsworth wrote, “I wandered lonely as a cloud,” he was not directing us to the chemical composition of clouds or how they produce rain. One of the biggest stumbling blocks in the religion/science argument (as if religion were the custodian of divinity, or as if there were not centuries of scientists arguing for divinity) is the idea of omnipotence. Exponents of science as cosmology don't get upset so much with some other attributes said to describe a divine nature as the idea of a Creator (which the Declaration of Independence assumed, but that's another story). After all, science has done a tremendous job of describing the processes by which “creation” occurs.

Science arising from Aristotle does not take into consideration Aristotle's discussion of the difference between “act” and “potency.” For example, I have the ability to have children, but I have never done so. I have the potency with which to do my part in the process, but the act of unprotected sex has not occurred. The world is filled with things that have the potential to act, but do not. And the idea of omnipotence does not necessarily mean that an act has occurred, as Aristotle has explained.

He also made quite a distinction between materia prima and materia secunda. In no place in philosophy, out of which science arises, did anyone ever consider matter in the way it is generally conceived today. Materia secunda or secondary matter was actually based on the idea of primary matter, which is more like the matter that alchemists talked about (which is, of course, Binah and prakriti).

I'm in agreement with Mikey. I've had wonderful friends who were afraid of guns and thought of firearms in some abstraction about public policy. However, I don't regard a personal decision to be unarmed as either wise or admirable. I love my friends who are afraid of firearms, but I don't want to be in a foxhole with them. Where I live, people have shooting ranges on their property. People were still fighting Comanches in our great-grandparents' time. Now maybe the fight will have to turn to drug cartels. But I'm drifting.

Other news sources and interviews of the family members of the deceased have stated Hicks showed up at their door with a rifle one night to complain of noise but, that once the wife and her sister showed up that's when his overall demeanor changed.

It just so happens that the wife and sister walked around in the traditional garb (the hijab).

And popping three people with a revolver? That's purposeful this isn't akin to the 9 year old losing control of the Uzi and killing the Gun Nut instructor.

So, yes the evidence thus far to me clearly points to him having an issue with the young muslims and let's not kid ourselves here. If Hicks was named Abdul Mohammed and had killed a young southern white college student and his evangelical wife and sister the right-wing internet fart bubble would be exploding calling this another Benghazi.