Blasphemy: You Know It When You See It--Right? 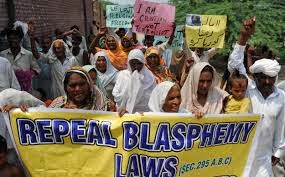 So, I have been following with some interest the protests occurring in some Moslem communities against the Charlie Hebdo "blasphemous" cartoons, because it just strikes me as so...forced. People are being killed in these protests. If protests from Karachi to Algiers are to mean anything, they are only to remind us that the compulsion to ban and kill to protect a ban on free speech exists all over, and that the sentiments of the attackers didn't come from nowhere. The idea that speech--ironic speech, critical speech, vulgar speech, should be met with death, is a sentiment enshrined in some nations' very being. Which does nothing to hallow it.

Take Pakistan, where very recently over a hundred schoolchildren were killed by extremists, whose legislature seems to be mouthing the extremists line. "Death to blasphemers?" Like, death to Asia Bibi, whose alleged blasphemy charge is very thin indeed? Like, death to Veena Malik?  Like death to Rimsha Masih--a mentally challenged child falsely accused?

The blasphemy laws in Pakistan are clearly arbitrary and can be politically motivated and terribly subjective. How does anyone look at lawmakers cheering the terrorists who killed people in France as anything but terrorist sympathizers--as being murder-minded and encouraging to people who feel this way?

It very much reminds me of the Justice Potter Stewart  definition of obscenity: "I know it when I see it." Which is subjective enough to do no one any good.


I am not sure why countries have populations that find speech a greater offense than the slaughter of people who are trying to say something--except I do understand, these countries are settling political scores internally and are happy enough when people are distracted by apostasy and don't fixate on the ways they are oppressed at home--so they foster this outlook internally as well. (Do they also support anti-blasphemy protests--a thing I wonder.)

I'm with the protesters from the picture at the top of the post. Blasphemy laws are witch hunts. They serve no good purpose. They should be ended, to show that the nations so ending don't stand with terrorists who try to cozen people by killing those exercising their free speech.

I know. I have a rich fantasy life that I think this could ever happen.
Posted by Vixen Strangely at 12:40 AM

I think you may be underestimating the lethal power of mythological indoctrination. Certainly religion has a long history of being a highly useful tool of control and manipulation of the population, but I think that's clearly a secondary explanation for this kind of sectarian hatred. When you raise people entirely within a single worldview wherein no doubts or questions are permitted, where legend is taught as historical fact, where descriptions of mythological beings, their powers, their dispositions and their peccadilloes are taught with the same certainty as farming and home-building skills, then you unleash these intellectually stunted, fearful, bigots on a world that to them is the perfect embodiment of evil, then killing apostates and infidels becomes a noble duty with rich rewards.

The fundamental premise of religious mythology is evil precisely because it is entirely dependent on indoctrination from earliest childhood. It's incredibly hard to break through that kind of training and reach the person inside.

Hi Vixen, yes, you do have a rich fantasy life.

But then you have to realize that roughly 300 years ago in what is now the US magistrates burned witches in Salem.

So we have gone from burning witches to Starhawk in 300 years. It almost exceeds the speed of light when you think of the changes that had to occur in order for this to happen.

If the world is still here 300 years from now as humanity races at breakneck speed for the drain, it will be curious to see what kind of religion the robots practice. (Did you hear that robots now sometimes teach school in Japan? And that they may be coming out with a sexual model? Good things are happening!)

The question is how to achieve balance. And since human beings are imperfect in their non-transcendental state, balance rarely occurs. And it's situated on the point of a pin and quickly overbalances into a new set of calamities.

This murky cobweb was cleared up a lot for me by Joseph Campbell. He explained that the problem with life it that it is ambiguous. Sort of yin-yangish. As Gautama said, “if you're not in nirvana, you're in sirvana.” As we are all in sirvana, we are all in ambiguity.

This would all be bad enough in itself if it were not the fact that technology and financial possibilities have all pushed us into other countries' business. Normally each country fights to find its own balance. Now balance would seem to be impossible.

Well, populations from Japan through Europe and the United States are failing to reproduce themselves. No wonder Japan is going to robots, and eventually as R. A. Schwaller de Lubicz has explained to us, cultures and races are begin forced together without first providing us with a sense of concord. Certainly no trouble could come out of that...

Let's hope that these internecine struggles in the Muslim world will lead to the same sort of grudging tolerance among Christian sects post Thirty Years' War.

I'm not holding my breath, though.

I have a tendency to see theocracy as a kind of utopianism, in that the adherents feel like, if everyone started reading out of the same book, why, everything would be hunky-dory. It's just that once they've agreed on a book, all the other books have to get burned. Once they've only got the one book, they all have to get on the same page. Once most everyone is on the same page, they'll fight to the death over paragraphs. They are looking for something good to come out of an ideological OCD.

I can somewhat see the possibility of the flames of Islamic radicalism dying down--I just doubt it'll happen in the foreseeable future.