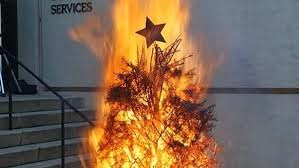 All things considered, I think I'm what Richard Dawkins calls a "secular Christian". I sing the hell out of carols. (Being in choir from elementary school through college has given me a tremendous reserve of tolerance for the wall-to-wall PA Christmas Musak that plays in retail establishments from Black Friday onwards, and slowly overtakes the regular music format on most radio stations--I am accustomed to practicing Christmas songs as early as September. I rip out "Jazz Gloria" in the car just to dust off my pipes sometimes, or dig in on "O, Holy Night". For a lot of the population, though, the constant ringtingtingling-to-do is practically like commercialism psy-ops.)  I love holiday cooking. I am about as big a fan of nasty great big dinners of turkey, ham, or prime rib with nonsensically complex side-dishes galore, like actually not from a can cranberries, mashed sweet potatoes although you better not put a marshmallow  near that business, and beautifully flavor-glazed fussy-ass veggies like green beans almondine or Brussels spouts with bacon, as can be found flanking a table.

I like shopping for people. I get a kick out of trying to make people happy with something they might not buy for themselves. I try to be jaded about the holidays, but deep down, for me they are a gasser. I like cheap glasses of Elmo Pio and family gossip. I like store-boughten refrigerator pies. I like gathering with people I have not seen all year and connecting like it hasn't even been a year at all. I like the holidays. I sometimes even unclench, kick-back, and for minutes at a time, don't express the kind of politically hip and with it pov I get on with here.

So naturally, I needs must point out that Christmas in the traditional sense could very well be in peril. Well, of course, it always is, a little. Grinches abound. And sheer human stupidity has made the idea of the flaming Christmas tree a warning that maybe putting your weeks-dead evergreen in a thin puddle of water right next to a fireplace, or hooking it up with decade-or-so old dollar store electric lights, is not the healthiest activity.


But what about the future of the feasts we so enjoy?  What about the trees?  And how will our carols change to reflect the world we'll be living in?

Look, either the Ebeneezers catch on, or nobody gets very Merry in the time to come. I see a crutch by the hearth, and the crutch was marked with "we thought coal could be clean", and the hearth was cold, because nobody needed to burn anything to keep warm anymore, anyways.

But you know. All the same--Merry Christmas to all, and to all, a painless blight.
Posted by Vixen Strangely at 12:00 AM

Merry Christmas Vixen, to you and all your commenters.

You know, Vixen, for many years religious belief in the US was largely unchallenged. In more recent times a lot of people have come forward denouncing and even ridiculing religion and its bases, considering it to be superstition.

What many don't realize is that there has been a development beyond the consideration of religion as a superstition. The discipline of history of religions and comparative religions are most often studies in university's humanities departments rather than religion departments. They look at religions in a different way than theology does while taking theology into consideration. Phenomenology has also changed the perspective from which religious experience can be seen.

The Vedas are our oldest and most meticulous and metaphysically precise records, and yet in many ways they ratify rather than disprove other religions, including Christianity.

In the East there is a sort of trinity called Brahma, Vishnu, and Shiva. Brahma is the title for a level of consciousness that is responsible for the creative propensity. Vishnu for the propensity to preserve; Shiva for the principle to destroy.

This is why they have no difficulty in supposing that Christ was an incarnation of the Vishnu level of consciousness. Their metaphysical cognition has a place for divine incarnations.

In around the 1500s a lot of Jews were converted to Christianity because of a Qaballistic understanding. The Hebrew letter shin was placed in the middle of Yod-hey-vah-hey so then you had a yod, a hey, a shin, then vah and hey. As you know, every Hebrew letter also is iconography. And the letter shin is seen as a fire on an altar. Should you look at this letter you can easily see how that is depicted. A fire on an altar is a divine expression since it arises from an altar dedicated to divinity. This fire was understood to be the quality of love. So at this point divine love was put into the midst of the law. Jehovah with the inclusion of shin became Yeshuah, divine love as part of a depiction of absolute reality.

Needless to say, the Christ instructed us to love the lord God with all of our heart and mind and to love our neighbor as ourselves. The message of love is consistent relative to what we know about Jesus bin Joseph.

In all this the fulfillment of Tipareth has been achieved. There are three images for sephirah Tipareth: a young child (the nascent level of cosmic consciousness), a sacrificial king (the sacrifice of the ego to a higher level of consciousness); and Melchizedek, a resurrected priest-king (the cosmic consciousness in fulfillment, shining unobstructed through human form, perhaps somewhat like a Buddha or Lord Mahavira or one of the other great saviors of mankind).

I realize this is all very much out of the context of orthodox belief. I'll simply end by reminding you that in the Golden Dawn Yeshua was the word vibrated in the ritual of the Rose Cross. Yeats drew on this rose symbolism many times, and the Qaballistic understanding that echoes the Eastern scenario of the avatar is one of the principles involved in real Rosicrucianism. And obviously by that I do not mean any of the societies referring to themselves as Rosicrucian. Rather some of the metaphysical and structural antecedents that are part of the historic Rosicrucian understanding. (My ancestors actually stem from the origins of this philosophical understanding.)

The upshot of this Christmas message is that it is not necessary to remove Christ from Christmas if you don't want to. Understanding the perspectives brought to us by the new humanities disciplines has given us new ways of looking at it. When we try to understand religions in the context of higher states of consciousness and with the idea that religious symbols are directing us to an ineffable reality, it is a whole different ballgame.

There is a trend in atheist literature of comparing the Christ mythos to the mythology regarding a number of other religious figures: Mithras, Dionysus, Buddha, Krishna, and so on, where the uniting features of "virgin" births, solstice birthdays, miracles, etc, being so universal, as saying: this is obviously a myth--not a real thing. It's derivative. Why should it be given any primacy?

Except, to me, that this particular kind of myth is repeated so often, suggests that it might have a universal truth that is "truer than reality". It doesn't have to all be factually correct to resonate--it just does.

Hi Vixen, you're entirely correct. However, a few caveats should be made. Some religious presentations are entirely mythological. For example, in the Bhagavad Gita Krishna's long discussion with Arjuna is completely in illo tempore, that is, outside of time and space with no historical reference. Yet it is India's bible because it is a profound discussion between enlightenment and the ego.

In other religious expressions you have a more legendary approach. For example, there are many legends around Billy the Kid, but Billy the Kid was an actual person, and some of the things attributed to him are true. Then you have the difference that needs to be considered between an entirely mythological presentation of a greater truth and an actual historical figure.

For example, unlike the case of Christ, we have just about everything Buddha ever said from his infancy on. Scribes followed him around recording everything he did or spoke about. Gautama was obviously a historical figure.

And then another factor is that today we really understand a lot about the enlightenment state that Buddha spoke of. And whether it be a discussion of samadhi, satori, or for that matter the “grace of lumen gloria,” we know that in all times and in all places there are a few people who in fact do represent this fulfillment of human potential.

These days we know a great deal about this “awake” state. We know a lot about its stages, its peculiarities, its effect on the person whose consciousness has become enlightened; and once you know that this is a common trait it can be spotted around the world at various points in history.