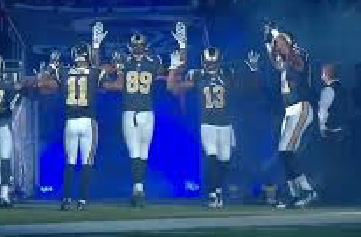 Several of the St. Louis Rams football team players expressed solidarity with the protesters against police brutality and unlawful slaying of black youth triggered by the August 2014 death of Mike Brown by multiple shots from the weapon of police officer Darren Wilson.  They made the "hands up" gesture that should signify that a person has no weapon in hand, and is no threat. They also linked arms during the national anthem.

As messages go, this is gentle, but resonant. There was nothing violent in their display--what they were saying was that the surrendered body needs to be treated by law enforcement as just another citizen, maybe to be taken into custody, but not to be killed. They were saying, with bodies of color and bodies of no small athleticism or size, that this gesture is all people of color and size have to signal their acquiescence to the force of law. And maybe they were implying Big Mike made that very gesture when he was shot down.

I think the St Louis Police Officers Association is "out of bounds" in suggesting that this silent protest was a kind of disorderly conduct or incitement by the players. It will, at this point, always be open to argument whether there was any aggression on the part of the slain teen, or whether Officer Darren Wilson slew him with little to no provocation. There won't be a real trial, I fear. I'm not sure of the grounds a federal civil rights violation case would have, and a civil case may not even be truly in the offing. Darren Wilson, who recently decided to quit the force for the sake of the community (and with nearly a million dollars in donations and payola for his ABC interview) may breathe something like easy.

But people who look like Mike Brown, John Crawford, Ezell Ford,  Sean Bell, Tamir  Rice, Akai Gurley, Eric Garner, and on and on, still can't exhale. Why shouldn't someone speak for them?

I'm sorry, but skeptical as I am about some parts of the Ferguson extended protests--this part was legitimate, and felt right. It delivered a peaceful message to lots of people about the vulnerability of even strong bodies. And if criticizing the use of police force on anybody that was not found guilty in a court of law  (yes, even Mike Brown needs to be presumed innocent) is somehow a crime--let's put the constitution on trial. No. They didn't tell anyone to do anything with their demonstration--they just did their own thing. And it didn't even interrupt the game. I call "no foul".