Frankly, Sen. Landrieu, I'd Rather Not Have the Pipeline 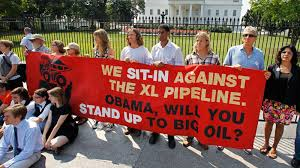 So, I guess we all understand that the White House (Obama) gambit to delay a decision on the Keystone XL pipeline was, in part (okay, mostly) political, because the decision was being delayed until after the midterms, so blue dogs could get out there and pretend they were as copacetic with fossil fuels as they thought their homefolks needed them to be.

But now that the midterms have come and gone, and the GOP will have control of both the House and the Senate, well...

LA Senator Mary Landrieu (D) would now like there to be no more delay. This is because she believes she hasn't lost yet. The Democratic Party, however, has a clear opinion. And if she thought that this would tip the president to authorizing the pipeline so she can get a little credit, well, it's likely Obama will actually veto such a bill if it lands on his desk.  And maybe it would be a little unpopular.

But fuck it, Obama is not running for another term, and the pipeline is kind of dumb. To recap, as I always will--it sends tar sands oil, which is the dirtiest fuel Canada has to offer, through the heartland--the breadbasket! of the US, so it can be easily shipped to China and who knows who. It will create temporary jobs while being built--but the US jobs for maintaining and monitoring the thing--do not exist as such, because what oil companies even do that stuff? (See--Enbridge. Or check out this list.)

Since Democrats already don't have the majority in the Senate, feh. I'd rather not have the pipeline, all things considered. Sure, Bill Cassidy would be an opponent of reproductive choice and a vocal opponent of the PPACA. But he isn't a total weirdo and his record on fossil fuels is...pretty much what we're getting from Landrieu anyway.  I really can't support the pipeline to save one Senate seat.

I almost want this to backfire on her for going for it. (Although if Obama could veto the damn thing and Landrieu could win a run-off anyway, I wouldn't be opposed. I'm just saying--priorities. And that's a longshot.)
Posted by Vixen Strangely at 1:00 AM

Meh. If not building the pipeline prevented them from shipping even a portion of the tar sands oil, that would be one thing. But insisting they use trains on ancient tracks pulling obsolete single-wall tanker cars instead of a modern pipeline to ship their nasty sludge seems like a really bad idea to me...

I am an American man, and I have decided to boycott American women. In a nutshell, American women are the most likely to cheat on you, to divorce you, to get fat, to steal half of your money in the divorce courts, don’t know how to cook or clean, don’t want to have children, etc. Therefore, what intelligent man would want to get involved with American women?

American women are generally immature, selfish, extremely arrogant and self-centered, mentally unstable, irresponsible, and highly unchaste. The behavior of most American women is utterly disgusting, to say the least.

As an American woman, I wholeheartedly support your boycott of us and genuinely believe it is for the best that you don't inflict yourself on any of us. I wish you great success at avoiding us in the future!

Hi Vixen, as you are a frequent exponent of gay and lesbian marriage, I am a bit puzzled that Anonymous thought your site would be fertile ground for his message. Up here the concern is whether gay or lesbians get married, and heterosexuals fend for themselves.

The gracious and lovely Alicia and I have been married 28 years and are still happily in love after all this time. Obviously marriage with an American girl has worked out very nicely for me.

However, I have heard this complaint from men before. And it usually follows a bad divorce or bad breakup with a girlfriend or a series of unsuccessful relationships. (In fact, I can remember doing quite a lot of bitching about females myself after one particularly odious breakup when I was single.) and Lord only knows that women go through the same thing, and I imagine in Lesbian circles one can hear a lot of derogatory comments about men. Then in gay circles one hears the 'breeder' adjective for women.

The climate between men and women has definitely changed in my lifetime. Women were sexually liberated by the pill, and feminism forcefully encouraged women to seek professional careers. This has pushed the marriage impulse back a good decade from the days when I grew up. In fact there are now more women in colleges than men.

Like all of these social transformations, the benefits and liabilities are a mixed bag. The lovely and gracious Alicia had a professional career when we met, and she continued to work at this career throughout the days before we retired. We never changed her name because she was known by her maiden name, and there was really no point in confusing the issue. (Although in retrospect, she says she wished she had changed her name, but things worked out fine for us.)

A number of books have come out written by women who are complaining that now they have become professionally successful, are doing well financially, it becomes harder to find someone to marry. If you have gotten your master's degree from Brown or Stanford, you probably are dragging your feet at marrying a carpenter. This can successfully be done, but there are a lot of potholes built into the scenario. You want to relax with a glass of chardonnay and listen to Debussey, and he wants to guzzle Budweiser and listen to Conway Twitty (This stereotype is also not always true.).

Anyway, this is apparently a problem that has emerged with the new sensibilities. Whatever you do, there are winners and losers, and there is rarely a social transformation that does not come with both good and bad possibilities.

Obviously, Anonymous has been hurt, and I would suggest to him that before he tries the Japanese (who have their own cultural problems) he try some southern girls, particularly ones who do not live in a big city. He'll find a larger percentage of traditionally oriented girls than you have up north.

I think Anonymous might not have been familiar with m fourth wave feminist tendencies, and just saw "woman blogger writes about woman senator--hating American women is totally on topic!" I usually delete posts like that, but such a strong opinion about around 109 million people sort of tickled me.

I can see how being hurt puts people off the idea of the opposite sex--after my first marriage ended (long story short--too young and dumb) I had a fleeting thought of quitting on men myself, not just the American ones! (Of course, after 12 years married to one, I'm glad the idea didn't stick!)