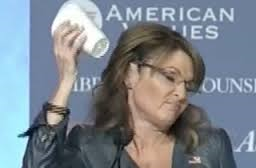 It's probably no coincidence that the Value Voters Hootenany considers Sarah Palin as much of a draw as CPAC does. They adore prop comedy. (Since Dennis Miller hasn't made regular folks laugh since the 1990's, I really think wingnut welfare should at least comp him a rubber chicken. If he can't incorporate it into his act, maybe he can bite it.)  Once again, Senator Ted "Tailgunner" Cruz is the beneficiary of the Bible-based zeitgeist. (Nota bene: Christie was not invited and finished behind Biden. Even us big-time lefties aren't putting Biden in our "sure thing" column. If he's winning over Christie in the VV14 poll, that's kind of a message, you think?) But I can't pretend that I know. I don't speak "Values Voters" lingo fluently.

I will say, I think Palin is irrelevant, but everyone has known that since 2009. She's there for schtick, and I commend the right wing for keeping vaudeville alive. But Santorum and Huckabee and Rand Paul and Cruz all spoke (and Anne Laurie at Balloon-Juice gives great re-cap of all of them) and all kind of gave a hint into the ways they aren't serious 2016 candidates.

I see things as an internetizen first and foremost--if it is on Youtube, it cannot die. I don't know how anyone can drop red meat at a VV do, and then pretend it doesn't exist in a general election. So if, say, Bobby Jindal, wants to allege Barack Obama doesn't understand American exceptionalism in a week where "we" are bombing ISIL in Syria just because--he's out on a ridiculous limb. Ditto Rand Paul on "personhood", or Cruz on a lot of things.

I see easily a time when the Values Voters' do is a thing to avoid, because I don't see anyone selected by it in a straw poll as viable in any general election. But I do see the GOP probably pandering to that crowd for some time to come, anyway.

Posted by Vixen Strangely at 6:00 PM

Eventually, they'll figure out the number one lesson of electoral politics in a highly partisan electorate. That is the concept of "Who else they gonna vote for?"

Just as the Democrats assume (correctly) that liberals will hold their noses and pull the level, the Xtianist crowd will vote for the farthest right fascist every single time...