Birds of a Foul Feather 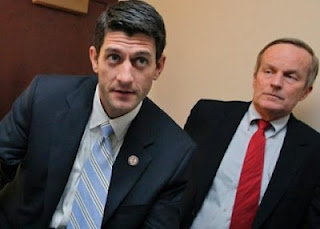 It wasn't that long ago that RNC Chairman Reince Priebus was trying to tell us there was no War on Women, at all, at all.  How silly! That would be like a war with caterpillars!  Who would believe such a thing?

Probably people who have been paying attention, that's who. So here we are, in the midst of the 2012 election cycle, and what are was all talking about?

Although several conservatives, including GOP Presidential candidate Mitt Romney, have been concerned that the unabated candor of Rep. Todd Akin might hurt the Republican party's chances of winning a majority in the Senate, my opinion about this is surprisingly akin to Tea-Party favorite, Rep. Joe Walsh's, on this topic. I don't understand why he doesn't have more defenders. After all, no exception in the case of rape is a GOP party platform plank this year. And this is how numerous GOP candidates and office-holders feel about it. Although Akin seems to believe the problem was simply misusing the word "legitimate" to describe the rapes that result in pregnancy due to his peculiar misunderstanding of how a woman's anatomy works, and even GOP VP candidate Paul Ryan seems to think this issue comes down to a mere hair-splitting over what is considered rape (even though he, along with Akin, pushed for a definition of rape that included the word "forcible"), they are falling just a bit short of the real ghastliness of their stance and why it doesn't play well with many women.

Yes, it is a gutting kick in the crotch to have ill-informed people imply to persons with direct, first-hand experience of rape that their experience doesn't count or wasn't the real thing.  The old, proverbial "adding insult to injury". But let's just stop dicking around with the definition of rape, because if there is a ban on abortion with no exception for rape--at all, that doesn't even enter into the conversation.

It doesn't matter if a woman was held at gun or knife-point, if she swallowed her own teeth, or if she was held down by hands that sprained her wrists.


It doesn't matter if she didn't cry out because her baby was in the next room.

It doesn't matter if she fought back--for a little while, or a long while.

It doesn't matter if her father started coming into her room from the time she first had breasts, and she let him so he wouldn't start on her sisters.

It doesn't matter if she was tied up, or that she still has scars.

It doesn't matter that her addict older brother sold her for beer money.

It doesn't matter that she was only (what age do you need?)

It doesn't matter if she was a virgin, and because of the wounds she suffered, she would never really be able to....you know. Or you can imagine, can't you?

And it wouldn't end there, because, you know, life. That little bundle of cells is someone's baby once born--our "she", and a rapist's. And that rapist may insert himself into the life of our "she" and that child. Tying them all to his sick, twisted self. Possibly leading to the child also being sexually abused.

And the the GOP has decided that's okay. It's better, really. For the woman to experience every physical shock of childbirth, and then every emotional horror on behalf of herself and a child she never asked for. Not because she chose it (because if it is a choice, I'm sure some can make this work and even find strength in the struggle and love their children--but that isn't everyone) but because the state said--the government enforced. The law refused.

That vision is very disquieting to me. It's a vision of government that denies a person the right to the privacy and dignity to heal themselves and cope with their body as they see fit. It's a government intrusion into a woman's life and health. It's an intrusion that could even be responsible for her death.

But the GOP, the champion of small government? The upholder of the rights of the individual? The proclaimer of law and order? What are they doing for victims? At all? At all?

Well, they may pray. Their opening prayers at the RNC will be made by Cardinal Timothy Dolan, pedophile-enabler and warrior for the rights of the religious to decide what their employees can do with their bodies, because otherwise--oh noes, war on religion! So that could be a comfort.

Or maybe another insult.
Posted by Vixen Strangely at 12:39 AM

But the GOP, the champion of small government? The upholder of the rights of the individual? The proclaimer of law and order? What are they doing for victims? At all? At all?

This is the kicker- it's freedom for corporate persons, not so much for female persons.

I usually don't use these sort of analogies, but this time, it's war. Hell, it's been war for the past thirty-some-odd years, but their clandestine campaign has been outed, and we need to fight back. Lives depend on it.