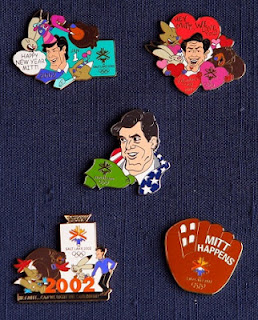 I feel like I'm really, really late to this thing--but I honestly never knew about the Mitt Romney-themed Olympic pins.  I knew, vaguely, about the Olympic pins from 2002 being manufactured in China, despite many of them having a patriotic American theme, but that's almost a cliche, right?

Apparently, this was a thing:


Critic Ken Bullock has them in his Olympic pin collection.

"We have Valentine's ones with all the Olympic mascots around saying, 'We love you, Mitt,' " Bullock says, as he pulls up images of the pins on his computer.

"We have him pulling a sled of some sort where some of the mascots are saying, 'Are we there yet, Mitt?' "

Ken Bullock scoffs at what he calls "the Superman" pin, which features Romney "with a Clark Kent chin," wrapped in an American flag.

"I don't know how to put words to describe how narcissistic they are," Bullock says.Three Olympic pin collectors and experts consulted by NPR say they've never seen pins like these featuring the CEO of an Olympic organizing committee.


I have honestly nothing else to say about that.

Posted by Vixen Strangely at 2:38 PM