There Hasn't Been a Spending Binge Under Obama, Despite What Romney Says 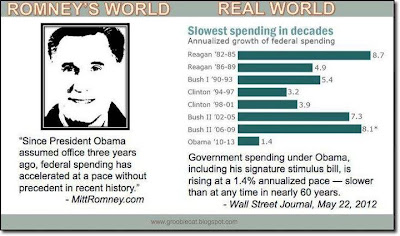 The graphic really does most of the talking, here, and I don't have a whole lot to add to it, except to point out that just because this chart has gone viral on Facebook and been called "mostly true" by Politifact, doesn't mean that Romney won't carp on about spending under Obama's administration as if his candidacy depended on it--because it probably does.

The only way things Romney says about the economy make sense is if you buy into the idea that government spending is an economic problem. The federal debt is a kind of problem, but at historically low interest rates, it's not as immediate a problem as unemployment, for example, or high personal debt in the form of mortgages, credit card debt, or student loan debt is for millions of Americans whose wages have been stagnant even as some staple costs like fuel or health care have gone up.  A lot of the federal spending arguments strike me as being beside the point--revenue should be paying down the debt, but not at the expense of functions of the government that are necessary to protect the welfare of our citizens. If we have more homeless, hungry and unhealthy people among us--we will all pay more in the long run than if we are taking steps to keep people capable of contributing to the economy and to our society.

Romney has come out as a proponent of the Ryan budget, which is definitely not a debt-reducing plan in the least. When conservatives wax maudlin about how future generations will suffer under the yoke of massive debt, they kind of forget one of the possibilities that exist for not so encumbering their grandbabies--actually generating revenues right now to pay it down (which is why I'm bullish on the Progressive Caucus' budget plan, myself.)

Anyhow, Romney's claim about understanding the economy is just bullshit, and not just because Krugthulu and I say so.  Listen to him, and compare what he says against your own kitchen table conversations about how we can get out of the financial mess going on. In your guts, you'll know-- (he's....not right).

Well, at any rate, he's willing to lie about it all, Romney is. And his ability to lie--well, that counts, too.
Posted by Vixen Strangely at 11:25 PM