Show Me the Plane Ticket 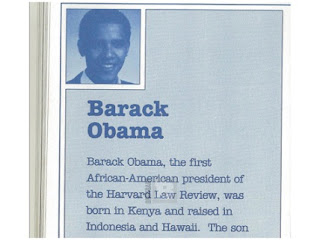 What a weird, birther-y week it's been. We've had one CO US Representative, Mike Coffman, indicate that he didn't know where Obama was from, he just wasn't an American. We've had the Secretary of State of, where else, but Arizona, Ken Bennett, imply that President Obama might not be on that state's ballot because he considers Obama's birth certificate to be suspect, following in the footsteps of the great detective, one Sheriff Joe Arpaio, whose evidence consists of "read a book saying its' suspect", "WND", and "oh look, shiny thing". And then there was the journalism find of the week from the Breitbartlets (complete with "non-Birther, no really, we're just raising questions and presenting evidence" disclaimer): the smoking brochure, where apparently someone at the literary agency repping Obama mistakenly indicated that he was born in Kenya.

This is supposed to be proof that people surrounding Barack Obama have been carefully cultivating an Obama myth to obscure the Real Obama. I think it's proof that agents more or less skim the books their authors put out.

But it's not a bad theory: there we have Barack Obama, poised to embark on a political career that will ultimately take him to the White House; and there's the literary agency, conspiring to help him by dishing out a nugget of disqualifying information....Wait, what?

The narrative breaks down just a bit more in John Nolte's response to the Obama Campaign's response.


Fact: The Breitbart bloggers chose to ignore the very clear facts that belie their claim.
The literary agent who put together the 1991 pamphlet in question noted that, “there was never any information given to us by Obama in any of his correspondence or other communications suggesting in any way that he was born in Kenya and not Hawaii.” The mistake in the pamphlet was the result of “nothing more than a fact checking error” by the agent.

Despite the Breitbart bloggers’ claim that the booklet was an attempt to manipulate some carefully crafted persona, numerous news outlets had already reported the President as Hawaiian-born. A year before the pamphlet’s release in 1991, a New York Times article on Barack Obama’s election to head the Harvard Law Review reported correctly, “Mr. Obama was born in Hawaii.”

But it's the combination of both bullet points that's most revealing. We've since learned that the agency in question, Dystel & Goderich, asks writers to submit their own bios and if our President had an "R" after his name, this is the thread that would be pulled to launch a thousand mainstream media questions, the most obvious among them being: Did Obama submit his own bio? If so, what did it say? How in the in the world does someone mistakenly assume an American citizen was born in Africa? This may well be a "fact checking error," but it's an awfully bizarre one with an origin that deserves an explanation. Moreover, did Obama ever see the 16 year-long error and request it be fixed? Was he ever asked to proof the bio?


Did Obama submit his own bio? I dunno.  The book he was peddling is kind of a bio, if you want to get picky. But I guess it was too long for the purposes of the brochure.  How in the in the world does someone mistakenly assume an American citizen was born in Africa?  I'm going to go with careless reading and the word "Kenya" being all up in that. Although that shit seems to happen a lot if you know what I mean.  Moreover, did Obama ever see the 16 year-long error and request it be fixed? (I know, it's not like he was doing anything else the past 16 years, for fuck's sake!)


Anyhoo, the wind-up and final pitch is this:


And yet, the literary agency that handled this "skillfully created self-portrait" known as "Dreams from My Father" is the same literary agency that falsely claimed Barack Obama was born in Kenya. This potential new piece of a puzzle, though, has only been met with dismissiveness from Politico (along with the rest of the media).


So, Politico and the Breitbartlets are in concurrence that Obama has a "skillfully created self-portrait", and yet the existence of (wrong) information being out there that Obama wouldn't have wanted as part of his self-portrait if he has designs on the White House is proof of--

Well, I'm just stumped. Did that dastardly slickster, Barack Obama, deliberately collude to make people think he might be born in Kenya to aid in his presidential ambitions? Good god, people.  Wheels within wheels. That is some crafty-ass thinking. And Politico is making nothing of it, you say? Obviously, they are in on it, too. I am going to take everything I read on Politico with a grain of salt now.  I really have John Nolte to thank for that heads-up.

So, back to the title of this post--I've been giving this whole Birther thing a good hard think, and I am going to help them with advice because I am a compassionate giver by nature. Hey, Birthers? You keep looking for something screwy with the birth certificate. As if. Obama and the state of Hawaii are all over this one, guys. They keep fronting like you can only get a Hawaii birth certificate by being born there, and it really does look like Barack Obama was born there. So you need to go another route. Barack Obama totally had an accomplice with this whole "getting-born" thing. His mother was in on it. So if you can produce a plane ticket that puts her teenage, broke, freshly-married, college-kid, pregnant body in a seat on the way to have her baby in Kenya, then we will have a conversation.

Otherwise, Birthers,  please choke on a sackful of the sodium-enriched roasted disembodied genitalia of your choice.

(X-Posted at Rumproast.)
Posted by Vixen Strangely at 12:13 AM