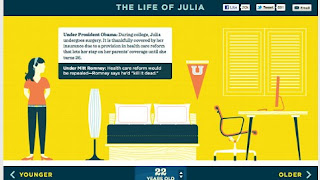 So, today Romney commented on a neat little gimmick the barackobama.com site has to show how one person's life might intersect in positive ways with the government through policies that the Obama Administration has either instituted or supported.  I think it's a pretty cool way to illustrate the differences between the policies of the two candidates, and also reminds us that government can provide opportunities to do things as opposed to limiting options.

It must be effective, because Romney had a case of the whiny's over it:


“Have you seen, by the way, the president’s vision for the future?” he asked. “To help us see it, his campaign has even created a little fictional character. It’s on the website, living an imaginary life filed with happy milestones for which she will spend the rest of her days thanking President Obama. It’s called ‘The Life of Julia.’ And it’s a cartoon.”

“Julia progresses from cradle to grave, showing how government makes every good thing in her life possible. Weak economy, high unemployment, falling wages, rising gas prices, the national debt, the insolvency of entitlements — all these are fictionally assumed away in a cartoon produced by a president who wants us to forget about them.”

Romney added: “By the way, what does it say about a president’s policies when he has to use a cartoon character rather than real people to justify his record?”


Oh, Mitt, you sad robot, that's not how it works at all. Actual people living not-wildly-privileged-beyond-dreams-of-avarice lives might just identify with Julia at her different life stages, and say "That is a program I could have benefited from"  or even "I did benefit from that thing." "Julia" is a composite of all the people in this country who benefit from different aspects of government every day.  People are born in state hospitals. They go to public schools.  They might have government employees for parents. The government of the United States and its subdivisions actually is responsible for a lot of what we call "good" in our lives as citizens. It's something we inherit from over two hundred years of democratic government, where people have voted their values and various programs have arisen from that representative government to fulfill aspects of those values, whether it be educating people so that they can occupy the workforce effectively, or ensuring the public health, or even just acknowledging that we owe entitlements to those that pay in to our system through their taxes in the form of Social Security and Medicare.   We Americans like to talk about our successes, and we consider ourselves a great and prosperous nation. Our democratic system of government, and the choices wisely made by our people over time, have contributed to that.

By not recognizing the relationship of government programs to actual people--instead carping about the fictional Julia--Mitt Romney shows that he simply doesn't get it. The economy may go through cycles of boom and bust, jobs may come and go, gas prices may rise and fall due to market forces--but the life the "fictional" Julia has experienced has made her more educated--which makes her more employable, less likely to lose a job, better able to find one, and more likely to make a good salary once she has one. Her children have health benefits and also are likelier to have more successful lives because of a government that provided opportunities.  They are better able to weather those difficulties because they had a government that had their back. That's not too shabby for a "cartoon" (and really, Richie Rich over there should prove he isn't a cartoon, himself).

If Barack Obama is "looking back"--he's looking back at the history of our nation and the ways we've come together to try and address problems through civic means. By mocking the systems we've put in place to create the higher standard of living we enjoy in this country, Romney is really misunderstanding what this American experiment has been about--how we together built a government responsive to our real human needs.

If he has a problem recognizing that real people benefit from these programs--maybe he doesn't know enough about how government works. If he thinks government can't or shouldn't provide opportunities, he can go be a part of some other country that hasn't prioritized those things. Maybe Somalia. Or maybe he could stop using the term "opportunity society" since he doesn't appreciate the opportunities our government already creates.