Mitt Romney Got Away With It. Probably a lot. 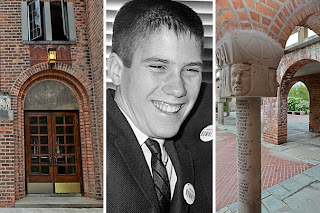 Jason Horowitz's WaPO piece revealing young Mitt Romney as a "prankster" whose version of pranking involved one one occasion, walking a visually-impaired teacher into a door and on another, involved physically assaulting another student with scissors in the company of a mob, actually turned the screw for me. My original perception of Romney was "clueless"--I though he suffered from just a bad case of privileged boobery combined with a mild empathy-impairment. I upgraded my estimate to: "and a gutless coward, too" as the only explanation for his squishy weaseling on the issues not long ago. But that article just made me see a sociopath. That wasn't the behavior of a dumb kid making mistakes. That was a pattern of preying on the weak and thinking their weakness was amusing. It was intolerance of differences. And I don't think he learned thing one from his experiences because no one bothered to teach him that it was cruel, or wrong.

A few days later, Friedemann entered Stevens Hall off the school’s collegiate quad to find Romney marching out of his own room ahead of a prep school posse shouting about their plan to cut Lauber’s hair. Friedemann followed them to a nearby room where they came upon Lauber, tackled him and pinned him to the ground. As Lauber, his eyes filling with tears, screamed for help, Romney repeatedly clipped his hair with a pair of scissors.

The incident transpired in a flash, and Friedemann said Romney then led his cheering schoolmates back to his bay-windowed room in Stevens Hall.

Friedemann, guilt ridden, made a point of not talking about it with his friend and waited to see what form of discipline would befall Romney at the famously strict institution. Nothing happened.

It's noted later in the article that Lauber was expelled for smoking.  They are very different things, after all. Administering a beating and a haircut at the head of a mob is very different thing when you are the son of someone very important from smoking while being a victimized kid of someone....probably not quite as important. I think the lesson young Mitt would have really learned is all too clear--


Whether he acknowledges how and what he learned is, of course, not quite a task Mr. Romney is up to.

See, Mitt Romney claims he doesn't actually remember what took place. But I can't help but ask, as one of the eyewitnesses to the episode asks, how can that be?


For months, the Romney campaign has been trying to turn away from questions about the candidate’s character and focus on his proposals to improve the economy. On Thursday, his aides struggled to deal with the account, first telling The Washington Post that Mr. Romney had no recollection of it. Mr. Maxwell, however, said he was skeptical that Mr. Romney did not remember something that had haunted all of the other men involved, even years later.

“I would think this would be seared in his memory,” said Mr. Maxwell, who identified himself as an independent who tends to vote Democratic. “Certainly for the other people that were involved, nobody has forgotten.”

I'm not so sure how many times Mitt Romney has ever administered non-consensual tonsorial adjustments or beat-downs to fellow students, but I, too, am pretty sure it would be a thing I'd think about.

Now, I'm just saying, even if it wasn't sincere, the guy could at least try to fake contrition, a little. But this is Mitt-freaking-Romney. He never learned that he should.  His life lessons were kiss-up, punch-down all the way (scathingly brilliant take on this by Pierce, as usual) and in his life, he hardly ever had to take a punch.

Which is why this pure example of weaksauce must be noted: his whining about the story being part of an Obama plot.

Romney was asked by Fox News host Neil Cavuto if the he thought the Obama campaign planted the bullying story, and he answered, “Well, I think you’re going to find, throughout this campaign season, that the president’s team will be doing everything in their power to try and hold up very shiny objects many of them will be with regards to me…”


Every shiny object? The bleached hairs of that lonely, trapped boy falling to the floor, the light glinting off of the scissors and the tears in his eyes at the helpless shame he was suffering from a bully who just didn't like the looks of him? Shiny like that?

And what does all this tell us about how he thinks of the rest of us poncho-wearing cookie-eaters?
Posted by Vixen Strangely at 11:53 PM

And what does all this tell us about how he thinks of the rest of us poncho-wearing cookie-eaters?
Just about everything we need to know, yes?

I hope this is just the beginning of his pounding in the general election campaign. The guy makes even overprivileged douchebags seem almost likeable in comparison.