Know Your Class War: You can't afford rent at 40 hrs a week in Any State at all 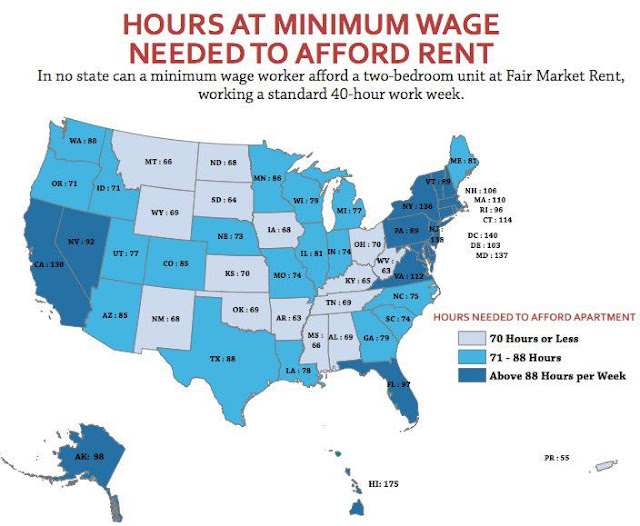 As the graphic shows , people can't afford to live independently on the current minimum wage. Just leaving aside the issue of rent, consider also that people regularly need food, to pay utilities, to be clothed, to pay for health care, and to cover transportation costs. And many people trying to do all of this with insufficient funds, are also incurring debt which also must be paid.

If you're working enough hours minimum wage to cover your most basic expenses--you are basically living to work.

When people discuss the minimum wage in terms of more jobs being available at lower wages, they are forgetting that people only purchase goods and services that they have the money and time for. Your grocery dollars contribute to the jobs of the people at your local food store. Your clothing budget helps support a salesperson or cashier. People spending money is what creates jobs--and people who are broke and exhausted, just aren't doing that.

I don't think it's a case of the rents being "too damn high", as it is a problem of wages being too damn stagnant. Raising the minimum wage would strike me as being a very good stimulus.
Posted by Vixen Strangely at 11:59 PM

People spending money is what creates jobs--and people who are broke and exhausted, just aren't doing that

But... but... trickle down! A GOLDEN SHOWER OF PROSPERITY!!!