But Do You Want Them? 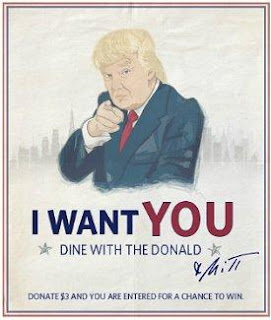 Despite what the stylized rendition of The Donald's hair seems to represent, this poster is neither selling cotton candy nor alpaca fiber woven rugs. No, this poster, portraying Trump as a kind of billionaire Uncle Sam (Uncle Semoleons?) is recruiting (see?) donors with the promise of being entered in a drawing to have a meal with the former governor of Massachusetts and the reality-show real estate mogul.

That's a bargain, depending upon your threshold for awkwardness and/or sense of humor. Me, I'm a lefty blogger and I presume drinks are paid for, so I might even be a little curious to see what the chemistry is really like between those two wild and crazy guys. Maybe I'd try to engage on what they really think about competition economically with China or the limitations of a truly free market, but I think we all know what the real Trump card is, and why it's kind of weird Romney is willing to play it this close to his actual physical, pretending-to-be-moderate-enough-to-win-a-general-election chest.

It's the Birther card, natch. And as Patrick McKinnion's heroic "Dispatches from Birtherstan" regularly shows, there lies some outstanding stupid and crazy.  Let's just say, if I were Mitt, and trying to look not-stupid, I wouldn't necessarily want to enjoy a candlelight supper with riparian entertainments with a guy who still straight-up thinks Obama was born in Kenya, even after Obama released the long-form birth certificate and actually laughed right at Trump like a boss. (Yeah, Romney joke in there, too. Because, you know. Inevitable Mitt.)

Was it just last week I was talking about how weak the literary agent/Kenya mishap was? Well here's how weak it really is--Trump believes it.  Or wants to believe it. Or claims he believes it. Here's The Donald:

“Look, it’s very simple,” said Trump, who has spent the past 13 months questioning Obama’s constitutional eligibility to occupy the White House (and only doubled downwith his stubborn skepticism after Obama produced a long-form birth certificate, certifying he was born on Aug. 4, 1961, in Hawaii, and then hilariously roasted him at the 2011 White House Correspondents Dinner. “A book publisher came out three days ago and said that in his written synopsis of his book,” Trump went on, “he said he was born in Kenya and raised in Indonesia. His mother never spent a day in the hospital.”

Actually, Obama’s literary agency at the time, two decades ago, published a recently discovered catalogue of clients and their projects that included erroneous information about Obama and a prospective book about race that he ended up not writing. An agency assistant back then, Miriam Goderich, said last week that she was mistaken when she wrote that Obama was born in Kenya.

But Trump isn’t buying it.

“That’s what he told the literary agent,” Trump insisted. “That’s the way life works… He didn’t know he was running for president, so he told the truth. The literary agent wrote down what he said… He said he was born in Kenya and raised in Indonesia… Now they’re saying it was a mistake. Just like his Kenyan grandmother said he was born in Kenya, and she pointed down the road to the hospital, and after people started screaming at her she said, ‘Oh, I mean Hawaii.’ Give me a break.”

So...we've found one person who totally buys it is a valid Birther argument? Sweet. So wouldn't anyone love to see if they could get Romney to refute that bullshit to Trump's face?  Not off to the side. Not while Trump goes to the can. Right to his face.

Now, I could never bring myself to throw three dollars away on the Romney campaign (I could just about bring myself to change it for quarters to throw at Newt Gingrich's visible-from-orbit head).  But I'd sure like to be there when the moment comes that Romney has to disavow the Birther shit for good. Because our man Trump looks pretty committed.  And Mitt sometimes fails at Courageous Truth-Telling 101.

And of course, until Trump can produce the plane ticket, he can feel free to masticate un sac du offals reproductifs avec Grey Poupon for all I care.

Posted by Vixen Strangely at 11:25 PM

My favorite thing about this is that Mitt is clearly second bill on this jaunt. It's as if he knows that nobody really wants to see him, and he doesn't really want to advertise that he's trying to ride Trump's coattails. The contest doesn't even require a donation- I think a whole bunch of lefties should enter just for the LULZ.