We Could Be Butterflies Someday, Though 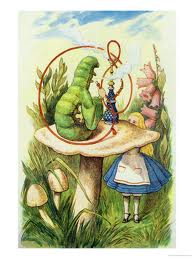 Wow.  Somebody should tell Reince Priebus "We're right here, dude. We can hear you."  Check this out:


Republican National Committee Chairman Reince Priebus was on a rhetorical roll Thursday. In an interview with Bloomberg TV set to air this weekend, Priebus said the so-called “war on women” is a Democratic fabrication perpetuated by the media, as frivolous as a “war on caterpillars.”

Huh.  I wonder which Amendment gave caterpillars the right to vote. Oh, that's right. Caterpillars aren't people. Women are. Incidentally, we also vote. I love (Editor's note--I don't mean "love") how his dismissal of the "war on women" includes the insinuation that our dumb lady brains believe whatever "mainstream media outlets" tell us, and that we can't figure out for ourselves that there has been a serious up-tick in bills at the state and federal level whittling away our access to reproductive health care. The article I just linked is from last year, and as it predicts, things have been getting worse.  And one can't help but note that this up-tick came right after the 2010 elections and the Tea Party insurgency that put more Republicans in office.


If Reince Priebus is confused about how we can figure this out for ourselves, he might want to direct his attention to fellow Republican, Sen. Lisa Murkowski:


Sen. Lisa Murkowski (R-Alaska) spoke out forcefully in favor of reproductive rights on Wednesday in Homer, Alaska, as many in her party have sought to restrict them.

"It makes no sense to make this attack on women," she said at a local Chamber of Commerce luncheon, according to theHomer News. "If you don't feel this is an attack, you need to go home and talk to your wife and your daughters."


Or maybe he could listen to Sen. Olympia Snowe:


Just a few years ago, Snowe recalled, she stood with President Barack Obama as he signed the Fair Pay Act named after Ledbetter. The political debate today "comes to contraceptive coverage," Snowe said.

"You know, it really is surprising, because I feel like it's a retro-debate that took place in the 1950s," Snowe said. "It's sort of back to the future, isn't it? And it is surprising in the 21st century we would be revisiting this issue. And Sandra Fluke should have been commended, not condemned, for her courage in expressing her own views and beliefs before members of Congress."


Or maybe he can't understand them, because he doesn't speak "caterpillar".

But just to pile on his craptastic point a bit--let's just take a gander at the so-called "war against the Vatican" Priebus would have us believe is a real thing.  Here's one scene from the battlefield:

Xavier University will stop offering contraception coverage through its health plan this summer, according to a report from WLWT News. The Jesuit university will no longer cover birth control or sterilization except for non-contraceptive reasons. Recently, several Protestant colleges warned they might discontinue health insurance to students if the Obama administration did not alter its contraception rule. Some other Catholic universities, like the University of Dayton, have offered contraception coverage in the past and say they will continue to do so. The Obama regulation allows religiously affiliated organizations to opt out of offering birth control.


So let's get this straight--this university is going to discontinue contraception coverage--which it had been doing without a qualm before--because they just discovered they had some moral issues with it? Or is this more of a politically-timed hissy fit, to say they can't either be made to do something which, under the rule as it exists, their insurance company, and not them, would actually be doing?

Nice try. I'm gonna go with "hissy fit" on this one.  Then I'm gonna sit here eating mulberry leaves until silk shoots out my butt.

Posted by Vixen Strangely at 9:45 PM

Even as he's trying to downplay the Republican war on women, he's firing a salvo in it. I don't think they can help themselves.

Oh, and don't be knocking the mulberries!

I have to admit--I got no beef against mulberries, or any other foragable eats. I only pick on mulberries as the favorite snack of silk worms--being the closest to caterpillars as my imagination would let me self-imagine.

(I've been fascinated with your posts re: foraging--I'm a weed-eater myself --ex-wiccan, kitchen witch, herbologist, tea enthusiast. My weedy backyard is a salad wonderland. I wish I knew where to find morels about now--but I've a corner on nettles, dandelions, and lemon balm.)