A Flag in Afghanistan 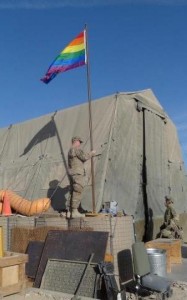 You know, this flag, to me, symbolizes the ways in which we aren't like the Taliban. Americans value inclusiveness, tolerance, respect for others and aren't ruled by a moral code that dictates to others what they should do with their private lives.

And Tony Perkins of the Family Research Council doesn't approve:

PERKINS: Where is the concern now for angering Afghan Muslims, who vehemently oppose homosexuality? The issue is as much an issue of military security as it is of religious morality. After February’s accident with the Korans, American lives were lost. What price will we pay because some want to use the military to show their gay pride?


Why does he think we should be dictated to by the Taliban?  Fear? (I suspect the image of gay soldiers standing up for our freedoms over there, makes him terribly worried about how they will come home and fight for them here.)  Sorry, Tony. Pride is a part of the American way.
Posted by Vixen Strangely at 10:02 PM