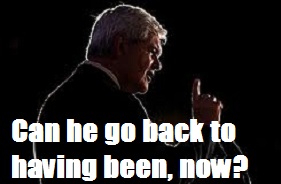 Sometimes a vast sea creature will beach itself on one of our shores, and its ponderous bulk will resist all attempts to slip it back into the depths from which it came. It will die there, on land, and of course, it will rot.

As it rots, it will smell, and gather insects about it.  Out of concern for public health and safety, the corpses of these large beasts are occasionally exploded for quick removal.

Newt Gingrich is just about there. He commented today regarding President Obama's comments in response to a question about the killing of Trayvon Martin with the following:


"Newt Gingrich called Obama's remarks about Trayvon Martin "disgraceful" in an interview with Sean Hannity, according to CBS/National Journal.

“It’s not a question of who that young man looked like. Any young American of any ethnic background should be safe, period. We should all be horrified no matter what the ethnic background," Gingrich said. "Is the President suggesting that if it had been a white who had been shot that would be ok because it didn’t look like him?"

Earlier in the day Gingrich told reporters that he thought the case should be investigated and suggested the shooter was at fault.

"That’s just nonsense dividing this country up. It is a tragedy this young man was shot," Gingrich continued on Hannity's show. "It would have been a tragedy if he had been Puerto Rican or Cuban or if he had been white or if he had been Asian-American of if he’d been a Native American. At some point we ought to talk about being Americans. When things go wrong to an American. It is sad for all Americans. Trying to turn it into a racial issue is fundamentally wrong. I really find it appalling.”


Someone asked the President a question. He answered it as a parent would. The man who killed Trayvon Martin used a racial slur and had a history of alarmism about black people.  No one's "trying to turn it into a racial issue"--it is one because even if it wasn't one, many, many, people besides the president believe it is, and grown adults who are trying to lead a country pay attention to how other people feel and react. Tired old grifters who have one big trick left pull out the whistle and blow. We aren't horrified because the victim was black. We're horrified because the shooter walked. Because he wasn't arrested. Because the boy lay in the morgue three days while his phone had his parents' number in it, and they weren't called. Gingrich may ignore how race may have impacted the treatment of this case, but he does so ignorantly if he doesn't realize that people will feel something about that and now won't let it be ignored.

There are differences among people in this country. There is a big difference between Barack Obama and Newt Gingrich. It shows.

Posted by Vixen Strangely at 1:05 AM