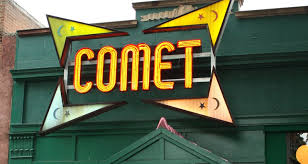 There is a price to pay for bullshit. Voltaire is quoted as saying: "Those who can make you believe absurdities, can make you commit atrocities". So my mind doesn't exactly boggle when a person who self-selected for bullshit came away with an absurd notion that resulted in arming himself and entering an innocent business to "investigate" or ...to shoot people.

The fake news piece is lurid and unsubstantiated. And people with a surprising amount of responsibility have been sucked in because they, too, have self-selected for bullshit. Threats have been made towards the business in question, businesses in the neighborhood and journalists who have tried to point out that the whole thing is bullshit because this bullshit is so awful that they prefer to believe it.

Think about that. Debunking becomes a nefarious cover-up to a true believer. Trying to unravel lies becomes heresy. And people who believe this kind of nonsense are in the circle of the PEOTUS.

This thing I was saying about how facts matter? This is exactly what I'm talking about.
Posted by Vixen Strangely at 6:35 AM