Things related and not.

You know--last month there were no war casualties. And that seems so much like progress. 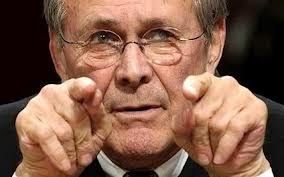 So because I am a Generation X pessimist, I want to take it back--to where we began--with the Secretary of Defense immediately post-9/11 talking about waging war on Iraq.

With the intelligence all pointing toward bin Laden, Rumsfeld ordered the military to begin working on strike plans. And at 2:40 p.m., the notes quote Rumsfeld as saying he wanted "best info fast. Judge whether good enough hit S.H." – meaning Saddam Hussein – "at same time. Not only UBL" – the initials used to identify Osama bin Laden.

Now, nearly one year later, there is still very little evidence Iraq was involved in the Sept. 11 attacks. But if these notes are accurate, that didn't matter to Rumsfeld.

"Go massive," the notes quote him as saying. "Sweep it all up. Things related and not."

How many casualties in the time since? Necessary--y/n? I say, "No." This was a clusterfuck of Cheneyian proportions. The hawks done f-ed up.

Yeah, major clusterfuck, and its repercussions will be felt for decades- lost lives, lost money, lost standing. If that's a victory, I'm Rapunzel.

This is why when I hear this "the position of the US has been weakened in the world", I like to point to this gang. I am a bit interested in the Errol Morris documentary coming out about Rumsfeld, in a way. I have a fascination which how compartmentalized the principals of the Bush Admin were and are from the results of their decisions.