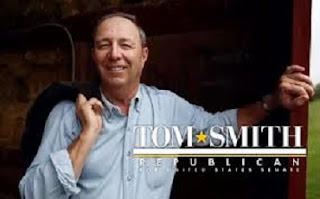 Well, there they go again...

In other exciting episode of Not Necessarily Not the War on Women, GOP candidate for US Senate Tom Smith made some fascinating comments about women, abortion, and rape.  Here's what he said:

Pressed by a reporter on how he would handle a daughter or granddaughter becoming pregnant as a result of rape, Smith said he had already "lived something similar to that" in his family.

"She chose life, and I commend her for that," he said. "She knew my views. But, fortunately for me, I didn't have to ... she chose the way I thought. Don't get me wrong, it wasn't rape."

When a reporter asked Smith to clarify what kind of situation was similar to becoming pregnant from rape, the candidate responded, "Having a baby out of wedlock."

He added, "Put yourself in a father's position. Yes, it is similar."

Hmmm. Both situations involve pregnant women--I guess he's saying the "method of conception" doesn't matter? But that unfinished thought that hangs in the middle, there: "But, fortunately for me, I didn't have to...she chose the way I thought."

Didn't have to--what? Confront the possibility that women actually make choices concerning their own bodies and lives that don't have anything to do with his opinion? Cast her out of the family for being a fornicator and a babykiller? Just what?

Somehow, when I put myself in a father's position, I actually kind of think I would want to support my child in doing what was right for her because she's a person, not a household good. I would be less concerned about what was fortunate for me and more concerned about the person who actually has the pregnancy and the decision.

Of course the "out of wedlock" thing also just sounds archaic and misguided. One more time: Rape is rape. Rape is not like consensual sex. Rape is a form of assault. And opinions like his are more proof that choices about what women do with our bodies shouldn't be left in the hands of people who believe "Put yourself in a father's position" comes before, "But what about her rights?"
Posted by Vixen Strangely at 7:40 PM

Forced gestation and childbirth are crimes, aren't they? They certainly are not legal remedies, relief, nor reparations for damages and injuries resulting from crimes against a US citizen (nor any other human being).

Why would any sane person or gov't knowingly commit an additional crime against a rape victim? That's just sick and wrong.

Yeah, it's creepy alright- one has to wonder what sort of pressure he subjected his daughter to both before and after her (presumed) "OOPS" moment. I have no doubt she didn't receive comprehensive sex education, nor did her parents level with her about sex.

And these bozos want the same for our daughters.