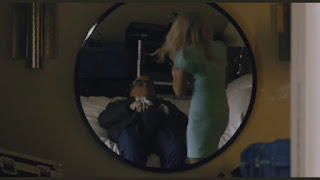 I know that using a still from Borat 2 that shows former NY Mayor Rudy Giuliani flat on his back on a hotel bed with his hand down his pants on my blog is unfair, because still photos can be misleading, but I also think that images can be instructive. Mr. Giuliani maintains that his hand is down his pants because he is tucking in his shirt.

Keeping in mind I don't do his clothes shopping and didn't teach him how to dress himself, I do wonder why he's tucking his shirt in laying down when this is best done standing up. I also don't know how long his shirt is, so I don't know how far down his pants his hand needed to go. I don't have an opinion regarding his scotch intake because I've been advised my opinions about drinking are peculiar to my own metabolism.

What I will say about the image however, which Giuliani also suggests might be a bit altered, is that it is a damn shame when people are set up to have revealing moments pulled wildly out of context, or to have people use their prior assumptions to create vicious, untrue images that could very well ruin a reputation, don't you think? And I am sure Giuliani believes this is happening to him because of his politics, of course!

(I have always said of ratfuckers that it helps to have a very tiny...conscience.)

I don't know what I expect Giuliani to learn from this experience because some people don't actually learn things. They only serve as examples.

Posted by Vixen Strangely at 11:38 PM