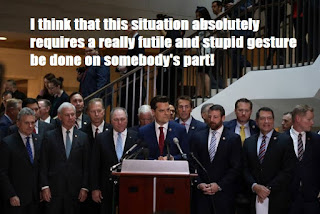 I still haven't adjusted to the stupidity of the timeline that I'm currently living in, and sometimes find myself obsessively checking on stories to make sure I haven't simply finally worn off the last bit of threading on the old nut and had a screw come loose, but about thirty GOP Representatives actually did swoop in on a SCIF with their electronic devices recording away in an attempt to delay and disrupt an impeachment inquiry deposition this morning, ordered freaking pizza, got kicked out, and then the deposition happened anyway.

That's a thing that happened. They did it really publicly, too. And Trump knew it was going to happen and approved of it. (Well, yeah. I guess that's the part that makes it all make sense.)

I don't take their pronouncements about the process all that seriously--Republicans are on the relevant committees and have and do attend these closed-door depositions. The closed-door process isn't some new, made-up thing being used just for the purpose of darkly twisting information to make Trump look bad or whatever. And I really don't doubt that once there are public hearings, the same damn people will be out and about belly-aching about privacy.  It really looks like it wasn't about releasing transcripts either--it was just about complaining about the process to create the impression of a controversy, and to delay the deposition in an attempt to derail the proceedings and possibly rattle people who come to talk.

It was stupid, and we will have to see whether or not it was futile (I also want to see if there are any repercussions for their entering the SCIF unauthorized with their phones for a damn stunt--it should be taken seriously.)

In more amazing stupid today--I was joking a week or so back that if Parnas and Fruman couldn't claim attorney/client privilege, maybe they'd claim executive privilege (last paragraph).  So, uh, well, that is also happening.  Sheesh. Anyway, these guys get around.

In a not-stupid thing, the NY bar thinks AG William Barr should recuse himself regarding the Ukraine matter. He really seems involved in it and likely has some explaining to do.  I think Barr should be impeached, myself.

If I'm not mistaken, Congress is now following rules that were changed by Republicans in 2015, when they controlled the House. How many of those 30 Congressional Reps voted for the rules they are now protesting?

More than a couple! I'm sure it isn't that they don't know the rules; they are purposefully breaking them for attention and relying on their audience not knowing.